The Best of Both Worlds: Global + Local

EVERSANA INTOUCH International combines the power of a global network with the heart of a local startup to deliver big, innovative ideas perfectly tailored to your specific market, audience, and culture. Our unique alliance represents a joint venture between EVERSANA INTOUCH Group and leading European healthcare agency Healthware Group, which allows us to provide efficiencies other networks can’t. EVERSANA INTOUCH and Healthware are seamlessly aligned, with a shared sense of purpose, and providing “best of both worlds” disciplines and services.

This unparalleled approach works – our global footprint is constantly expanding as we actively service more than 100 countries across the globe. In addition to our international headquarters in the UK, our core offices span across Europe, we have a growing presence in Asia Pacific, and regional partners in more than 30 countries.

One Big Idea Leads to Another 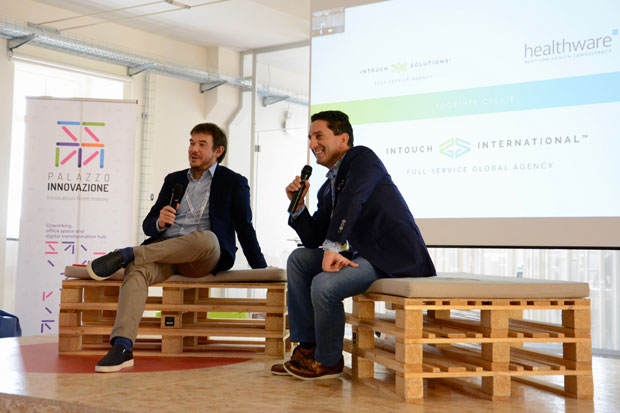 Our CEO and founder, Faruk Capan, was born and raised in Turkey. He traveled to the United States – and the University of Central Missouri – for graduate studies. After an internship at pharmaceutical company Marion Merrell Dow (now Sanofi), Faruk landed at Teva Marion Partners (now Teva), where he built the first-ever online patient portal, MSWatch. The first website of its kind, it was a major innovation in the 1990s – as well as a major challenge, as the team learned to manage entirely new ways of communicating with patients.

EVERSANA INTOUCH International combines the power of a global network with local and culturally relevant solutions.

With MSWatch, Faruk learned the invaluable ins and outs of medical, legal, and regulatory reviews. He tested boundaries. And he badly wanted to keep innovating. Very badly. So badly that he would occasionally go rogue and break rules. Finally, his boss said these fateful words: “I don’t want to fire you. But maybe you should start your own company.” With no detailed plan, a six-month-old baby, and little more than a dream, Faruk quit his job and founded Intouch in 1999.

Little did Faruk know that on the other side of the globe, around the same time, a like-minded soul named Roberto Ascione was starting his first business in Naples, Italy. Roberto was born into a family of physicians and studied medicine as well. But a chance, childhood encounter with a Commodore 64, the 8-bit computer then at the cutting edge of gaming technology, led Roberto to discover the world of coding. Like Faruk, Roberto was a natural innovator and entrepreneur. While at med school, he had an epiphany: if he became a good physician, he could make a positive impact on a few thousand people. But if he wrote software for medicine, he could make a positive impact on millions. After graduating, Roberto combined his passions for healthcare and computer science, founding Healthware Group, with a mission to hack healthcare and write software to improve everything from physician education to patient empowerment to collecting clinical data.

Back in the U.S., after the success of that first pharma patient portal, Intouch was paving the way with many other “firsts” – more than we can mention here – leading the pharma industry through innovation. In 2016, Faruk and Roberto joined forces to create Intouch International, a full-service global agency and joint venture with Healthware Group. Two years later, Intouch reorganized to become Intouch Group, a parent organization representing multiple agency and specialty affiliates with a diverse suite of full-service capabilities.

We are reimagining the future of healthcare marketing.

One of the biggest milestones in our history occurred in 2021, when Faruk met Jim Lang, CEO of EVERSANA, the industry’s only fully integrated commercial services platform. They instantly recognized in one another a shared mission to transform the global life sciences industry with unmatched digital and data-driven commercial solutions that improve patient care and set out to reimagine what a healthcare agency could be. By early the next year, EVERSANA acquired Intouch Group and we became EVERSANA INTOUCH International.

Today, we’re part of a global presence in healthcare marketing, a five-time pharma agency of the year winner, a five-time best place to work, and one of the top 20 most creatively awarded healthcare agencies. And as part of the 6,000+ EVERSANA employees worldwide, we no longer sound much like a start-up. Yet Faruk still approaches our business as one to ensure we continually adapt, evolve, and grow. It’s why we continue to champion our unique capacity for seeking and embracing change, our tenacity in taking on major challenges, and our commitment to true innovation and what’s next.

How We Do What We Do

The Cultural BELIEFS THAT
GROUND US

Select a belief to reveal more.

I act with the patient’s best interest in mind.

I own every client experience and its impact on results.

I am empowered and hold myself accountable.

I own my development and invest in the growth of others.

I passionately connect with anyone, anywhere to achieve results.

I speak up to create transparent, thoughtful, and timely dialogue.

I create an environment of awareness and respect.

I am bold and creative in everything I do.