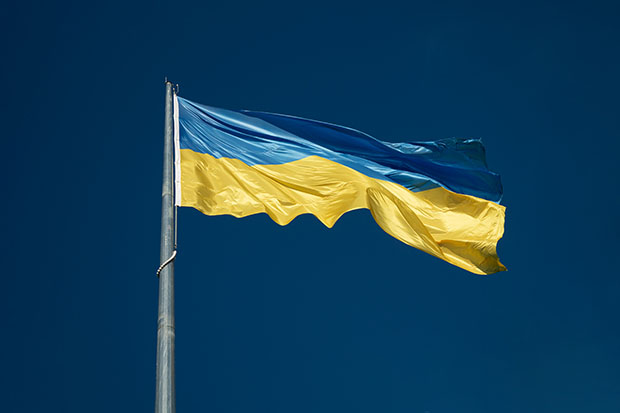 The Eastern European country of Ukraine is not in a good place right now. Daily military attacks from Russia have resulted in the decimation of cities and millions of displaced citizens; but not all have left, and neither do they plan to. In this Q&A, Chicago-based Svitlana Kochman, an associate creative director – and longtime Intoucher – whose mother is Ukrainian, talks about the country, the people, what motivates them to stand their ground, and more. We hope you’ll take a few minutes to read!

Seeing the daily news reports over the past month has been incredibly frustrating, emotional, and scary, even for Americans who’ve never been there or thought much about Ukraine in the past … what are you and your family doing to manage this pain?

We’ve been through all the stages of grief. At first, I was a wreck and my family and Ukrainian-American and Russian friends and I could not believe this was happening, even though all the signs have been there for years. We just didn’t want to believe it.

To cope, I have donated to multiple organizations, attended fundraisers, protests, and other community events (including one with the Ukrainian Ambassador to the US and senator Dick Durbin); I watch President Zelensky on IG every day, and my friends and I share articles and inspiring stories. That said, the thing that’s been the most rewarding for me is joining some friends to teach Ukrainian children folk songs on Saturday mornings via Zoom. It’s a random group of kids ages 6-12, and they’re happy to be distracted for an hour. There are Russian-speaking kids in the group, too, which is interesting for us here in the States, where the mainstream community is Ukrainian-speaking. Singing makes us all feel better.

Many people wonder what they would do in the face of danger – run or fight; not everyone is “built” for fighting. Ukrainian bravery and determination has been so inspirational to see – where is this strength drawn from? Is it fair to say this is a national characteristic?

I think if you know what Ukrainians have been through in their history, it comes as no surprise. I’ll try to keep this short and simple because there are many historical as well as very recent events that have galvanized Ukrainian citizens. Kyiv was the capital of a once-powerful nation called Kyivan Rus dating back to before the 900s, and that sense of nationhood and pride has never been erased, no matter how hard the various governments who have ruled over that land since have tried. Ukrainians have endured marauding hordes, oppressive empires dating back centuries, an enforced famine known as Holodomor that killed millions, and the worst of World War II and Soviet oppression. The historian Timothy Snyder has said that the idea of “freedom from empire” is ingrained in the people. And a Russian-American journalist I follow, Julia Ioffe, expressed it well recently on Stephen Colbert’s show: Ukrainians fought so long for democracy, and now that they’ve had it for 30 years and know what it is, they are fighting like hell to keep it.

Ukrainian Village has been a Chicago neighborhood for a LONG time; can you give people who’ve never been there a brief sense of what makes it so special?

I did not grow up in Ukrainian Village, but I have been going there regularly since my family moved to Chicago from New York when I was a child. I think the cluster of churches, social organizations, Ukrainian cultural schools, shops, museums, and restaurants make it feel like a community. There’s always something going on somewhere. You can definitely make a day of it as a visitor. It’s a one-stop shop for all things Ukrainian! And especially now, it’s the locus of some of the recent protests and events. They can’t keep Ukrainian flags in stock in any of the stores.

Same for Ukraine itself – what are a couple of things people should know about the country and the culture?

A couple of things that surprise a lot of Americans is that it’s larger than France — and that the famous boxer, Klitschko, is the mayor of Kyiv. Ukrainians are culturally well-known for their folk arts as well as their classical musicians and love of chess. But many artists, designers, filmmakers, and writers have broken through and are popular internationally, as well. It’s now a multicultural country made up of people of many religions and ethnic backgrounds, but somehow, I think their reputation as the “Italians of Eastern Europe” probably still permeates. You’ll never go to a Ukrainian’s house and not be offered lots of food — and vodka.

Finally, what more can we, half a world away, do to help?

Besides donating funds, supplies, or “renting” Airbnb rooms or services from Ukrainians, you can attend a protest, write to your senators, follow and/or support local journalism like The Kyiv Independent, and boycott corporations still doing business in Russia. The group Razom for Ukraine has compiled a list of ways to help. Finally, I think meditating and/or praying for peace is always helpful.

Note: In support of Ukraine and its people, Intouchers are gathering today to create hygiene kits that — thanks to our philanthropy partner Heart to Heart International — will be sent to those in need; stay tuned for more on that next week!

If you’d like to work for a company that values life and culture in all its forms, please visit our Careers page today.