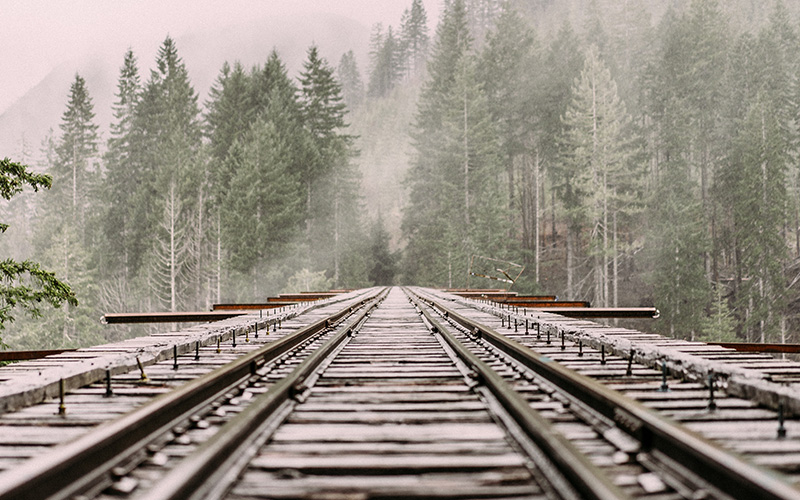 Did you know that health insurance as we know it in the US comes from … railroads?

When the transcontinental railroads were being built in the 1860s, battling their way through the mountains one John-Henry-driven peg at a time, their owners were battling another problem – keeping workers healthy. Building and working on railroads was phenomenally dangerous. And, by their nature, the railroads led people far from populated areas.

As a result, the railroads employed physicians who, in many ways, created emergency care. They built hospitals along their routes. And they created associations to pay for workers’ medical care. “The direct descendants are employer-based insurance and employer-based health care,” says Dr. Ryan Stanton, a NASCAR emergency medicine physician and historian of activity-based event medicine.

Railroad expansion was motivated by the private and public sectors. Lincoln wanted it. Businesses wanted it. The railroads themselves wanted it very badly. And the railroads’ success created many new things: out-of-season fresh produce, daylight saving time, urban sprawl, the tourism industry, traveling sports teams – and, yes, health insurance that helped people get healthcare in outposts across the newly far-flung reaches of our nation.

Healthcare delivery in the United States is still based on the nineteenth-century mindset: It’s fragmented and local, and many people on all sides agree that it costs too much and delivers too little. Some believe that this will lead us to the universal healthcare popular in many other Western nations. Some find that anathema for the United States, a nation founded on ideals of exploration and capitalism.

We will see this fragmentation disappear, there’s no doubt. But it may not cede its ground to a public-sector solution. In fact, we may be able to see where it’s headed already.

At the time of this writing, CVS, the nation’s largest pharmacy chain, and the 66th largest retailer on the planet, has bid $66 billion to buy the third largest health insurer, Aetna. This merger, if and when it goes through, would be the biggest in the history of health insurance.

And, over the past year, Amazon (the 83rd largest retailer) has gotten approval for wholesale pharmacy licenses in at least 12 states. A wholesale distributor is the connection between pharmaceutical manufacturer and pharmacy. The current top three, AmeriSourceBergen, Cardinal Health and McKesson, have a collective revenue of nearly $400 billion annually. That’s a great deal more than Amazon’s revenue of $136 billion last year.

These are examples of a sea change in healthcare. The fragmentation that was once needed to cover a big nation with brick-and-mortar healthcare has outlived its usefulness. The average person expects a seamless online experience to make their life easier, whether they’re shopping for a product or trying to feel better.

You don’t need to change your marketing plan today based on these specific changes. But you do need to be ready for this paradigm shift in our industry. How medicines get from manufacturers to patients is changing. Innovators are looking to find new paths through a complex and often inefficient heritage system.

A century and a half ago, the railroads connected our country, and changed healthcare as we know it. Today, the digital age has connected us – and is doing exactly the same. The local models that worked in an analog world are being left behind for business models that take advantage of digital connections and efficiencies. In quintessentially American fashion, there is once again, a race to see who can succeed.

How can your brands stay strong through these new integrations and innovations? As you expect the continuation – and acceleration – of these changes, remember three things:

If not? You might be standing at the station when the train blows right by.