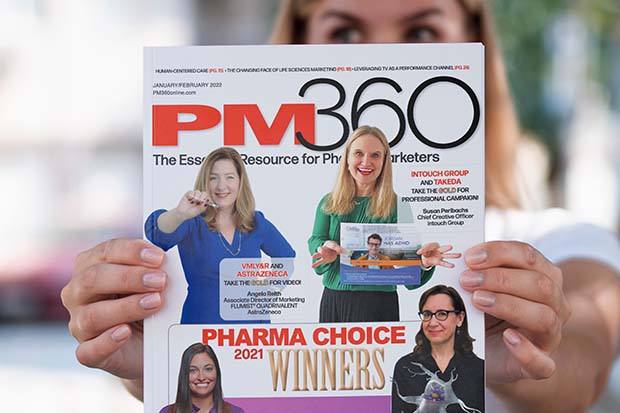 If you’ve been watching the Olympics, or even just the news about the Olympics, you probably know there’s been some controversy in the figure skating category. We won’t get into the sticky details here, other than to say that putting in the work and coming out the other side with nothing but disappointment (or embarrassment) … really can’t feel good. At Intouch, we try to avoid unpleasant feelings as much as possible, which is why we were excited earlier this month when industry publication PM360 awarded us one “gold” and two “silvers” in their annual Pharma Choice Awards competition.

How did we put in the work to achieve this recognition?

By creating a beautiful, informative professional campaign that sales reps can share with HCPs; building an adorable and helpful digital concierge that fosters genuine interactions and engagements with patients and caregivers; and crafting a powerful, real-world awareness campaign that tells patients they don’t have to keep living with their symptoms.

We’re also proud to give a celebratory shout out to EVERSANA ENGAGE, which earned a silver award for work with Evoke Pharma and the “Spray Your Symptoms Away” campaign, which promotes Gimoti® (metoclopramide) nasal spray for the relief of symptoms in adults with acute and recurrent diabetic gastroparesis.

But wait, why are we shouting out to EVERSANA ENGAGE? Because global commercial services pioneer EVERSANA acquired Intouch Group in December 2021, and this year, Intouch and EVERSANA ENGAGE will join forces — which undoubtedly means there’ll be many more wins to come.

More than 8,000 votes were cast for PM360’s 13th Annual Pharma Choice Awards; anyone in the industry can vote for their favorites based on content, format, imagination, influence on the industry, impact on the audience, and overall quality. To learn more, and to see visuals from our other wins, check out the most recent issue of PM360 magazine, and keep your eyes peeled for Intouch’s chief creative officer, Susan Perlbachs, who’s featured on the cover holding one of the winning campaigns.