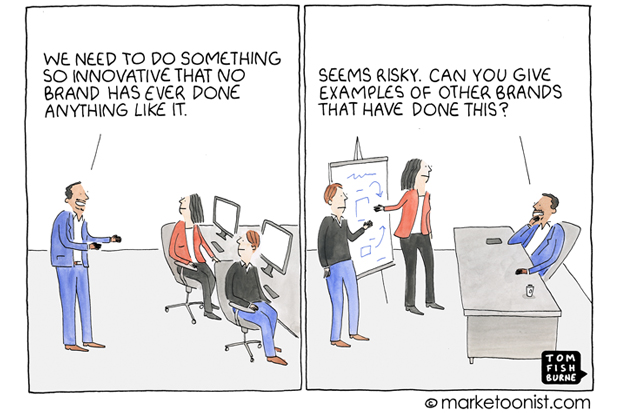 Cartoonist, author, Stanford lecturer, TED presenter, marketer, and cartoonist Tom Fishburne recently spoke to a group at EVERSANA INTOUCH with expertise drawn (pun intended) from his 20-year career as a marketer for brands including HotelTonight, Method Products, Nestle, and General Mills, and his decade-plus of full-time content marketing with his agency Marketoonist.

We’re so grateful for his insight and, with his blessing, wanted to share a little of his wisdom here. But for more insight and humor, visit marketoonist.com – and have Tom come to speak to your group!

In his discussion about the importance of innovation, Tom spoke about the difficulties, not only of innovating, but also of executing innovation, despite our shared belief that it’s more important than ever to stand out against the overwhelming clutter of daily life.

Tom spoke passionately about the power of humor in innovation, and he offered us several ideas to break through some of the common blocks of innovation – with many wonderful stories, examples… and, of course, illustrations!

Sharing imperfect, unfinished creativity (your true self, in many ways) can feel uncomfortable, and so can the process of protecting it as it comes to life. Tom encouraged us to accept those feelings of resistance as necessary parts of doing worthwhile work, and to create and protect cultures in which that happens!